The bridge stretches 3,030 feet across and 876 feet above the New River. This presented engineers with many design challenges. Engineers with Michael Baker Jr. engineering firm and the American Bridge Company ultimately decided to design and build a single span arch bridge to connect the north and south sides of the Gorge. Engineers were required to get pretty creative in the building process in order to accomplish a building feat of this magnitude.

In 1974, construction began on The New River Gorge Bridge. CORE-TEN Steel was chosen as the building medium due to its reputation for anti-weathering properties. CORE-TEN Steel is known for its signature rusty color, allowing the bridge to blend seamlessly into its environment. CORE-TEN Steel was also chosen because it never has to be painted, saving the State of West Virginia millions in maintenance costs. The New River Gorge Bridge was completed in October 1977 and was the longest single span arch bridge in the world for decades. It is now the fourth longest in the world and the third highest bridge in the United States.

One of the most unique aspects of the New River Gorge Bridge is the celebration that happens on the bridge every October. Each fall, in commemoration of the completion of the New River Gorge Bridge, the bridge is shut down and BASE jumpers are allowed to parachute off the bridge. Thousands of bridge enthusiasts visit Bridge Day to watch the event and celebrate a West Virginia tradition.

Visitors to The New River Gorge are able to enjoy the “Rusty Rainbow” from both the top and the bottom of the New River Gorge. Many choose to check out the bridge from the top, at the visitor’s center operated by the National Park Service, or from various trails both on the north and south sides of the river. For those looking for a more unique experience, many of the climbing routes in the New River Gorge offer climbers with a phenomenal vantage point of the The New River Gorge Bridge. ACE can also schedule a catwalk tour for those who want to view the bridge from just underneath the roadway, on a 24-inch catwalk (with railings) while being securely harnessed in.

If you want to see The Bridge from below, The Bridge can also be viewed from the New River itself on a Lower New River Rafting Trip, which takes out just underneath The Bridge. This full or half day trip even goes out on Bridge Day, so you can experience watching BASE jumpers from your raft during peak fall color season.

The New River Gorge Bridge is a West Virginia Treasure that has to be seen to be fully appreciated. Experience the duality of one of Mother Nature’s most beautiful scenes and one of mankind’s most stunning achievements with ACE. 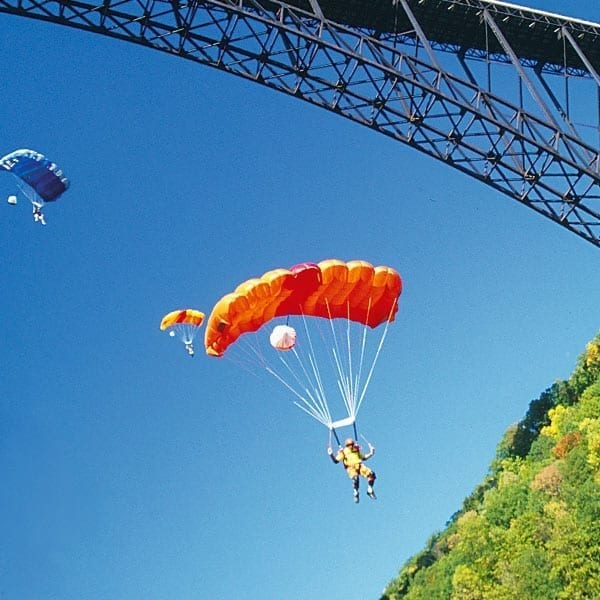 The most exciting event of the season is just around the corner here at ACE Adventure Resort: Bridge Day. Whether you plan to leap off the 876-foot-tall New River Gorge Bridge or simply watch daredevils…