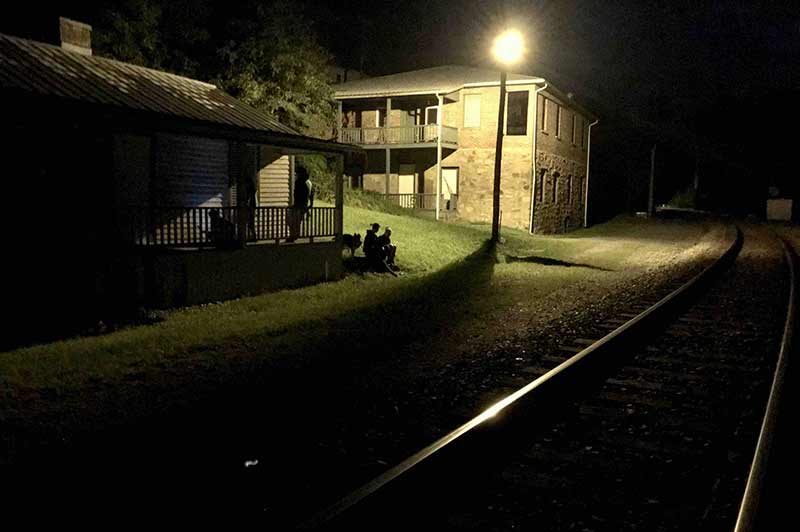 Thurmond, West Virginia is often described as a ghost town in the heart of the New River Gorge due to the abundance of abandoned buildings and colorful history it has seen over the last 150 years. There are rumors of ghostly apparitions walking the tracks, phantom steam engines still riding the rails and other unexplained phenomenon happening around town. ACE Adventure Resort’s team of experienced paranormal investigators lead groups into the dark corners and hotspots for unforgettable encounters with Thurmond’s ghostly residents. In 2019 we were able to visit Thurmond four times for paranormal investigations and here is a little bit of what we found. 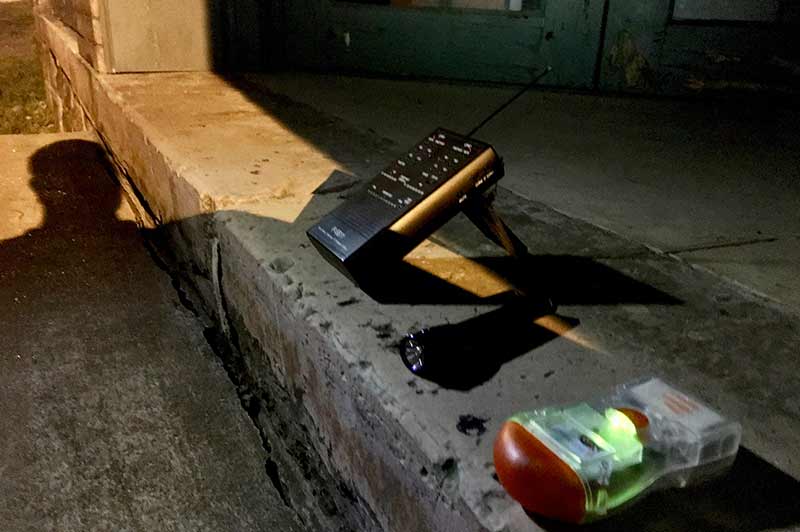 The Thurmond Post Office served as the town commissary for a number of years before becoming the post office that operated until 1995. This was a place everyone in town visited and socialized so there is a possibility this energy was imprinted into this space. Contact is often made inside the post office in the form of flashlight communication. This is where a flashlight will turn itself on and off. Often we can use this as a tool to ask spirits yes/no questions and get intelligent responses. We believe we have had communications with the postmaster here Jane Lawson, a participant’s grandmother that used to ride the trains and a small child. When communicating with the child we were able to get a small ball to move across the tabletop. The Post Office building is a great place to warm up to the paranormal energy found in Thurmond.

This building is the focal point in the town featuring a four-story building that housed a bank, doctor’s office, general store, restaurant, and apartments. We are often drawn to a storefront door near the bank end of the building to conduct our investigations. Here participants have seen orbs of light shooting across the inside of the building. Also flashlight communication with a spirit we believe to be named Barbara has occurred in this space. We have found on more than one occasion participants that work in the medical profession often feel a strong presence here. There are plenty of places around this large building yet to be investigated. 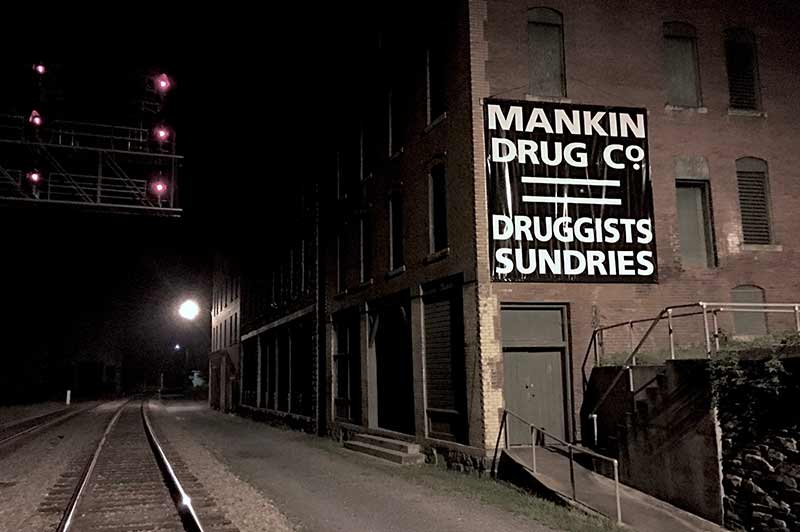 The Red House or the Trainmasters House as it was known is often a hotspot and guest favorite during our investigations. This building once housed the man that controlled the rail yard in Thurmond and really had control over most of what happened in town. We have had consistent communication with a spirit in the upstairs bedroom. This entity shows itself on our SLS camera on almost every investigation. The most jarring experience happened last summer when our psychic medium took one step inside the house and stated that he must leave because he was having feelings of strangulation. Later during our investigation a participant was struck with a feeling of strangulation themselves. This participant was unable to breathe and seemed very emotionally affected. They told us it felt like a large burst of energy around their ear before having the feeling that someone had their hands around their neck keeping them from breathing. We immediately left the building and they began feeling better and regained their composure. 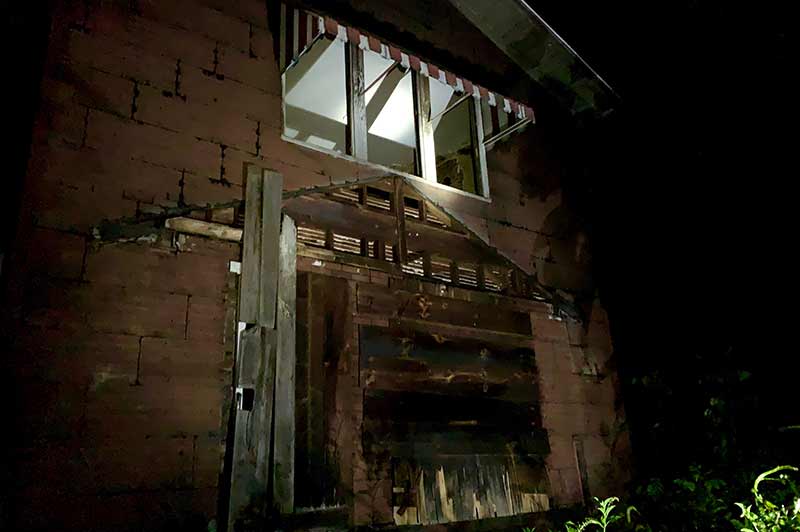 Thurmond’s darkest corner is where the houses are found in the lower end of town. Walking up a steep hill you can find some of the abandoned houses and overgrown porches. We have just started investigating this area that shows some great potential. A recent spirit box session seemed to open up communications with a little girl who may have met an unfortunate end here. Some guests have claimed to feel being drained of energy here and some even saw a black fog swirl around one of these participants. We look forward to investigating this are further.

Bring your Sense of Adventure and an Open Mind

I often start out telling participants on our paranormal tours that I don’t necessarily believe in ghosts and I am not sure how to classify many of these encounters in Thurmond. Are we tapping into some sort of energy field, seeing rips in space and time, experiencing some eerie coincidence, or maybe we are actually communicating with spirits from the New River Gorge’s past. I can tell you that every time we explore this ghostly town unexplained things happen and it keeps me coming back and looking for more. The day I see that phantom steam engine roll down the tracks I will be a believer and I hope you are there to experience it with me. Sign up now to be part of our investigations this summer. There are limited dates and spaces available as these tours always sell out. Bring your sense of adventure, an open mind and let’s see what we can uncover! 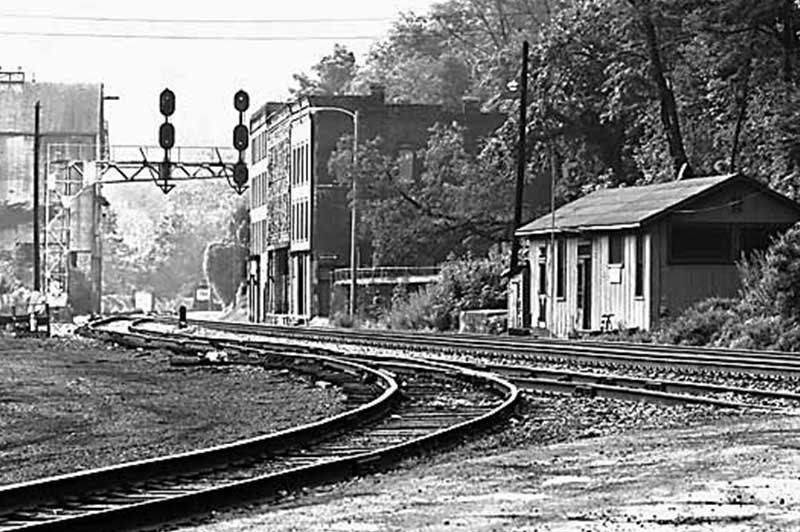 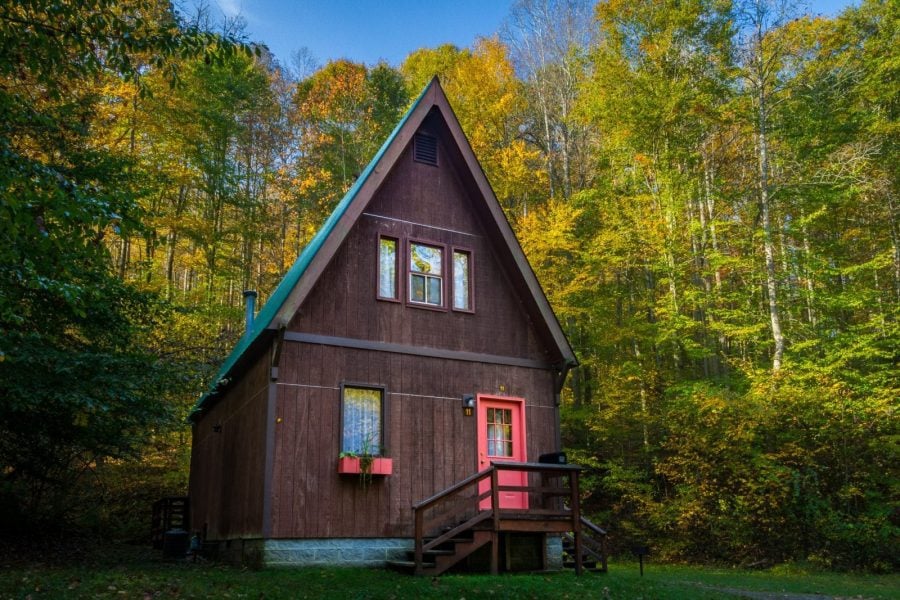 Summer draws near, which can only mean one thing: It’s almost time for much of the East Coast to venture deep into the backcountry in search of true seclusion. ACE Adventure Resort is within 230…