1.) What is the New River Gorge Bridge known for?

Not only is the New River Gorge Bridge known for being one of the longest single-span bridges in the world, it is also admired as an engineering anomaly for the bridge’s structural integrity. It is one of the highest bridges in the world that allows vehicular travel. Aside from vehicles, the bridge also allows a variety of activities that are out of the ordinary. Did you know that you can actually walk on the New River Gorge Bridge on Bridge Day? On the third Saturday of every October locals and tourists are permitted to walk across the bridge for a day full of Mountaineer fun and festivities! You can even jump off of it, if you dare (and meet all of the qualifications)!

Bridge Day is arguably one of the most popular days for West Virginia natives and even the surrounding states. Bridge Day began on November 8th, 1980 and has remained a staple tradition for West Virginians ever since. Bridge Day attracts thousands to explore the New River Gorge Bridge, shop from a diverse array of vendors, and watch the thrill-seekers base jump and rappel! Whether you want to observe the excitement or be a part of the magic, Bridge Day will always have something for you.

2.) Can you walk across the New River Gorge Bridge?

Walking across the New River Gorge Bridge seems like a dream, but did you know that it’s actually very possible? This bridge can be accessed by foot on two occasions. The lesser known way to get a chance at walking on the beloved New River Gorge Bridge are scheduled bridge walks! Well technically, you’re walking under the bridge. The second and more popular occasion is the aforementioned Bridge Day holiday. Bridge Day is the only day of the year that you can walk on the actual bridge that is usually only accessible to motor vehicles.

Bridge walks are available all year! Guests are harnessed in and walk across a catwalk underneath the bridge that is two feet wide. The tours typically last a few hours. ACE Adventure Resort is one of the few resorts that offer tours for $72 per person. The bridge walk is beginner friendly and with the minimum age requirement being 8, it is a welcoming and safe environment for families looking for an adventure! 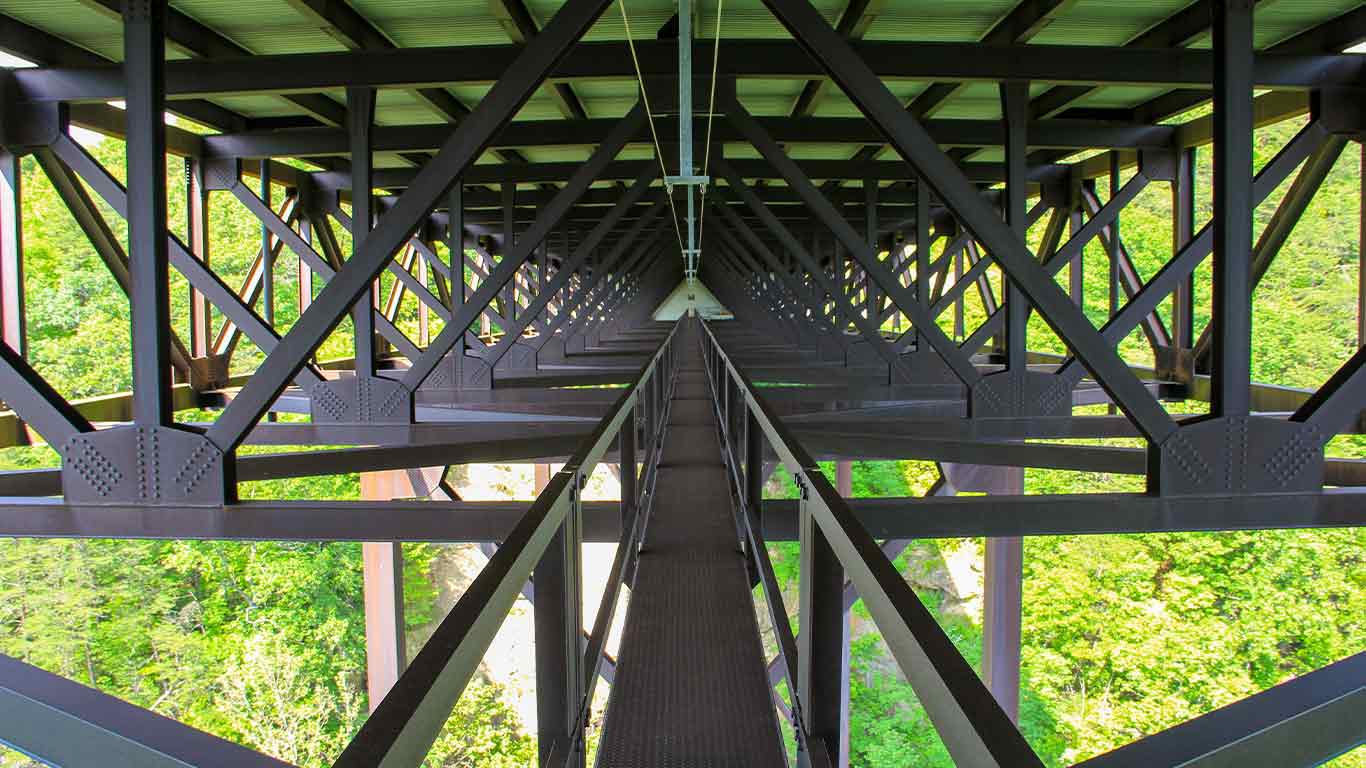 3.) What can you do at the New River Gorge Bridge?

Camping has recently begun gaining more attraction and offers a sense of vacation without straying too far from home. Locals and tourists can camp in the New River Gorge. While they only allow primitive camping, there are a variety of parks, campsites, and resorts to cater to each individual’s needs. ACE Adventure Resort offers campsites, RV sites, and cabin tents, so no matter your taste you can camp in style!

One of the easiest and quickest way to get a beautiful view of the New River Gorge is hiking! Locals and tourists flock to the magnificent trails West Virginia has to offer. One of the most popular trails is Long Point. This hike is fairly easy and provides guests with a view like no other. More trails include Bridge Buttress and Endless Wall. Each trail is unique and varies in difficulty, there is sure to be something for everyone in the Wild and Wonderful West Virginia mountains. 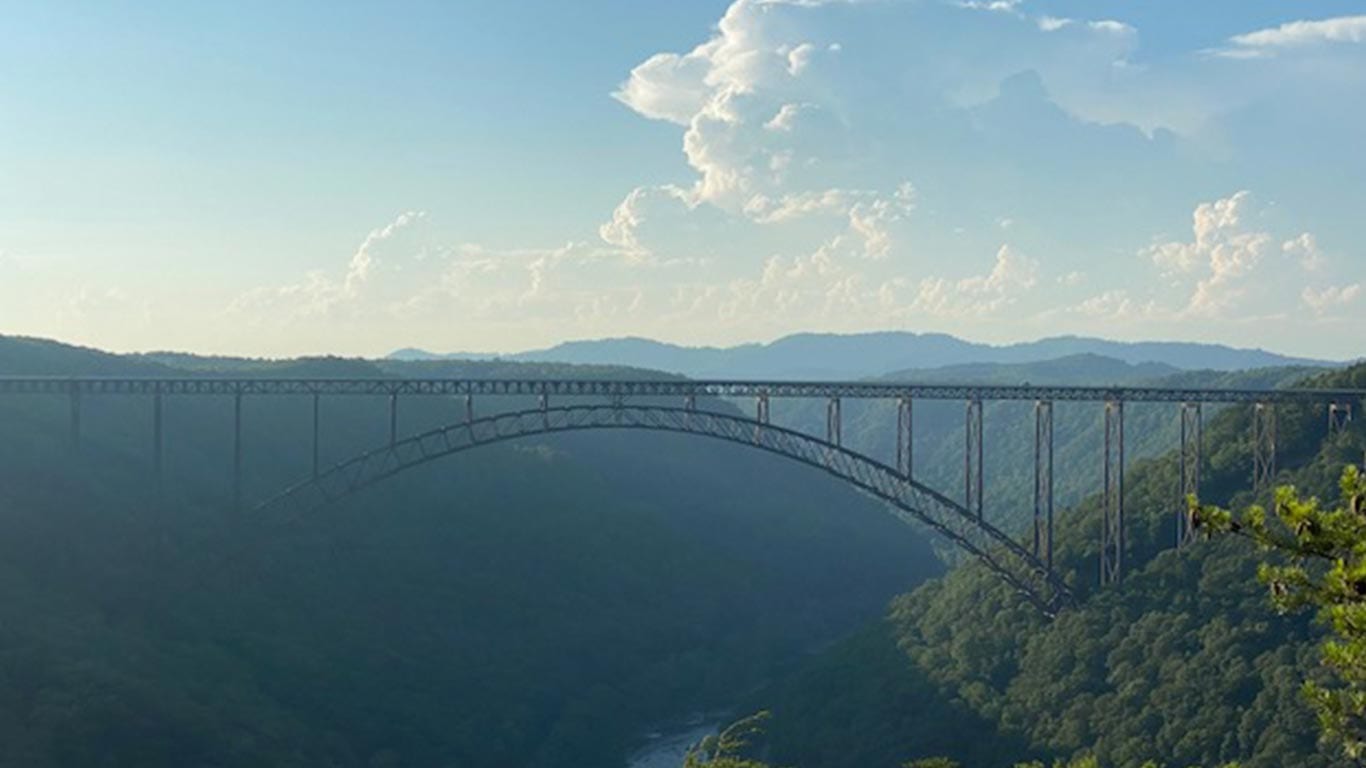 4.) Where is the New River Gorge Bridge in West Virginia?

Whether you are in the mood for a hearty sandwich or a nice dinner out with your family, Fayetteville is a foodie’s paradise. Some of the local shops include vintage attire, handmade jewelry, and beautiful crystals that make perfect gifts for anyone special in your life. Whether you are planning a vacation or just making a stop along the way, it’s clear that Fayetteville is a place worth exploring. 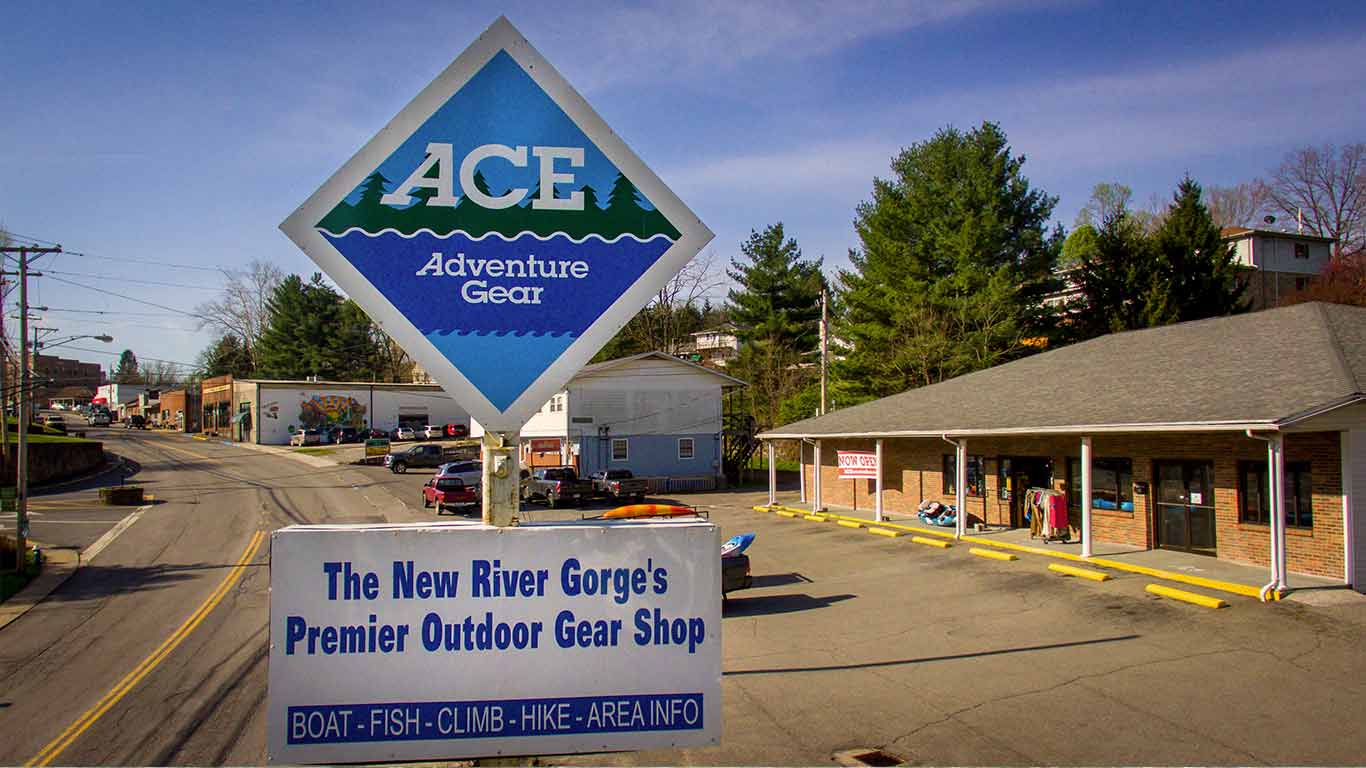 5.) How long is the New River Gorge Bridge?

The New River Gorge offers views that you would not believe. With multiple overlooks scattered in the gorge there is room for everyone to enjoy the magnificent scenery and take a much needed breath of fresh air. Bridge Buttress is a wonderful trail to check out with sights you can only dream about. Feeling restless and want more than just an overlook? Check out one of the many trails located in the New River Gorge. Make your way down to Bridge Trail, Canyon Rim Trail, or Endless Wall Trail! With so many options, you better get started soon! 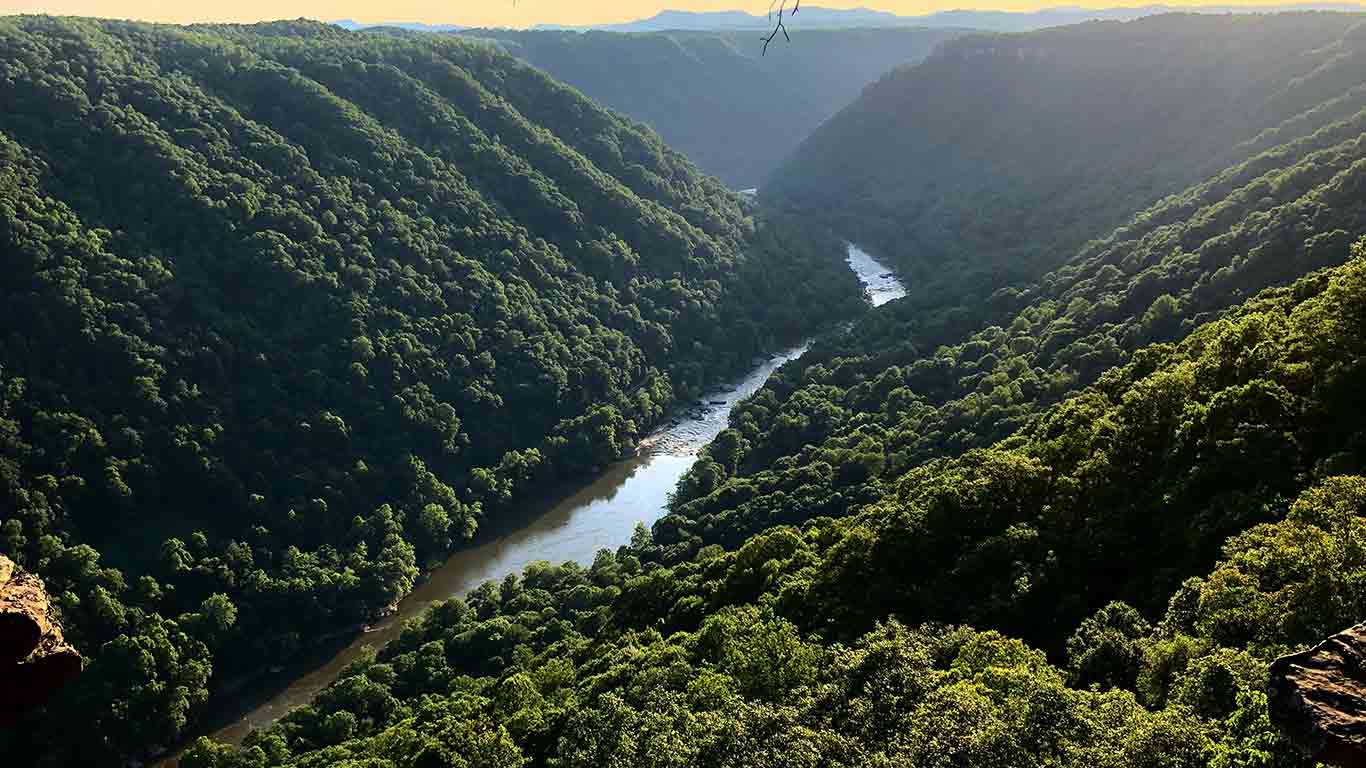 6.) When was the New River Bridge built?

The New River Gorge Bridge began construction on June of 1974 and was finished by October 22, 1977. Although, the bridge only took three years to build, the design process took years in itself. This 88 million pound bridge is capable of supporting an unthinkable amount of weight without buckling under the pressure. While it is easy to appreciate, it is hard to imagine the labor and brains that went into making the blueprint of this bridge a reality. 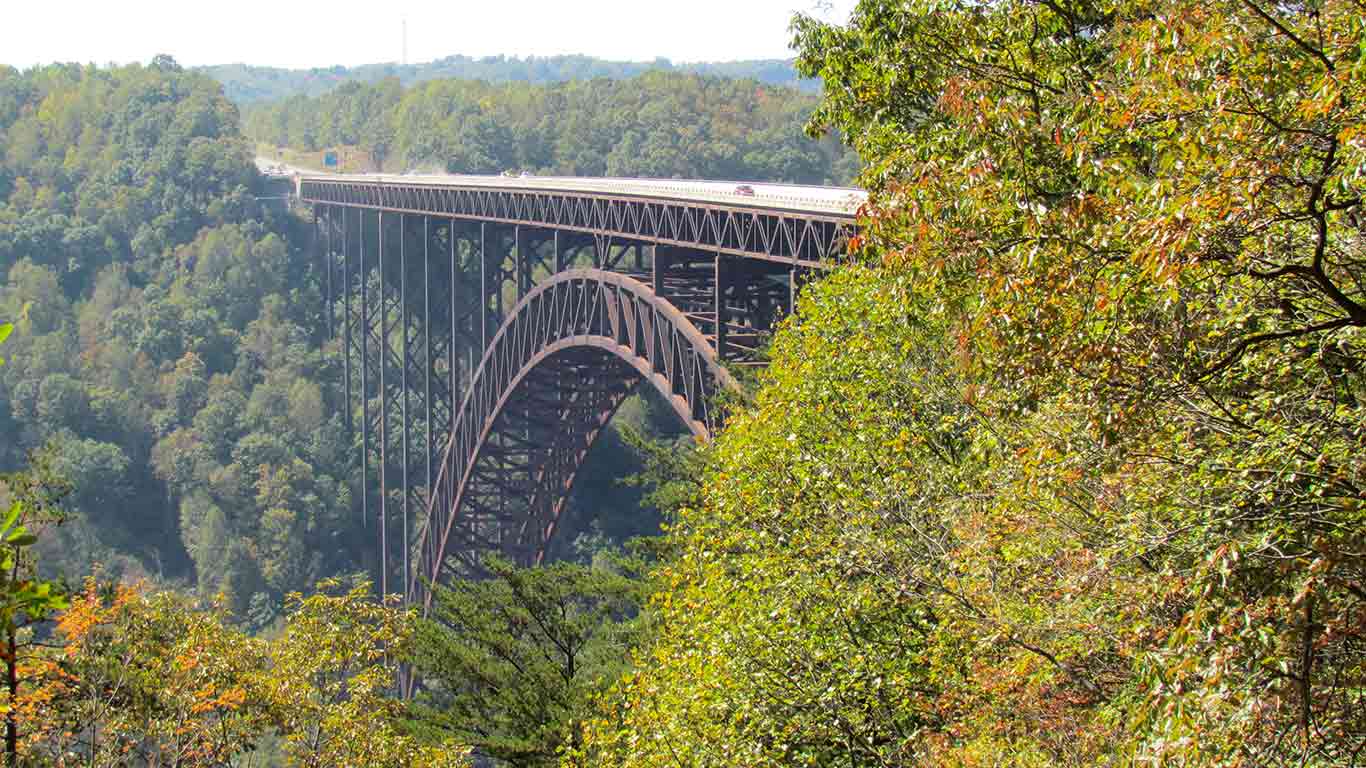 7.) What is the longest arch bridge in the US?

The New River Gorge bridge still remains the longest single-span arch bridge in the United States. The construction of the New River Gorge Bridge began in 1974 and lasted a total of three years. The bridge has been considered a masterpiece by engineers due to the innovative structural integrity of such an enormous man-made formation.

Not only has the New River Gorge Bridge gained recognition for its intricate interior and the construction’s immaculate execution, it has been home to Bridge Day for nearly forty years. Bridge Day began almost four decades ago and is still very much celebrated today. Up to 100,000 people crowd the New River Gorge Bridge and the surrounding area for an action-packed day!

8.) What type of bridge is the New River Gorge Bridge?

The New River Gorge Bridge weighs in at a whopping 88 million pounds. COR-TEN steel and cement make up this monumental bridge. The finished bridge cost over 37 million dollars to build but has been well worth it. It is the highest bridge in the United States that allows for vehicular travel. The New River Gorge Bridge is a landmark for the wild and wonderful West Virginia and brings in over 100,000 people on Bridge Day, so it’s a good thing it’s made from 88 million pounds of steel and cement! 😉

9.)   Can you bungee jump off the New River Gorge Bridge?

Bungee jumping is not allowed but you can base jump and rappel! Bungee jumping has been deemed unsafe for participants, but the thrill of base jumping and rappelling make up for it. While bungee jumping is no longer permitted, there was a time when taking that exhilarating jump was allowed. Bungee jumping occurred a few times on Bridge Day but in 1995 it was decided that base jumping and rappelling were the safer and more practical options. Recreational sports and activities have helped shape Bridge Day into the beloved and treasured holiday we all know and love today. Did you know you can get married on the New River Gorge Bridge? Tom and Vivian were one of the couples to say “I do” on West Virginia’s prized possession.

Have you ever wondered where base jumping off of the New River Gorge originated? One name- Burton Ervin. In August of 1979 Burton Ervin was the first man to start the tradition of base jumping off of the New River Gorge Bridge. Law enforcement and other officials were not too keen on Ervin’s brazen hobby and tried to shut it down on various occasions. However, Ervin persisted that base jumping would continue whether it was permitted or not. Because Ervin advocated for this activity so fiercely it was eventually allowed and gained the support of thousands.

One of the most interesting facts about the New River is that it flows north as opposed to the majority of rivers in the United States. The New River has become an extremely popular attraction for its rafting, kayaking, and other various water activities. One of the most popular white-water rafting companies in the state is ACE Adventure Resort. ACE was established over forty years ago and has grown tremendously in the last decades. This resort has managed to keep its close-knit family feel that everybody yearns for while also providing the activities and resources of a larger company. ACE is the place you belong. At ACE Adventure Resort there is something for everyone and a rafting trip for nearly all ages. Some of the most popular rafting trips include the Upper and Lower New. These trips take guests on a thrilling ride through the extraordinary rapids of the mighty New River. This ancient river has provided countless family and friends with unforgettable experiences! 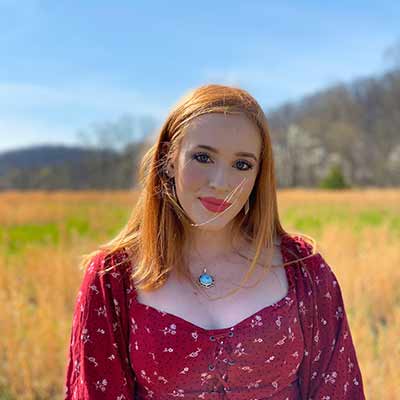 Larkin grew up here at ACE Adventure Resort and on the New River. Her dad, Jerry, is one of the owners of ACE, so adventure is in her blood. When Larkin isn’t studying at Concord University, she is working in the marketing department as a social media specialist. Larkin enjoys hiking, whitewater rafting, and being outdoors. If you can’t find Larkin at ACE or on the River, she’s at home with her cats Misa and Oscar.