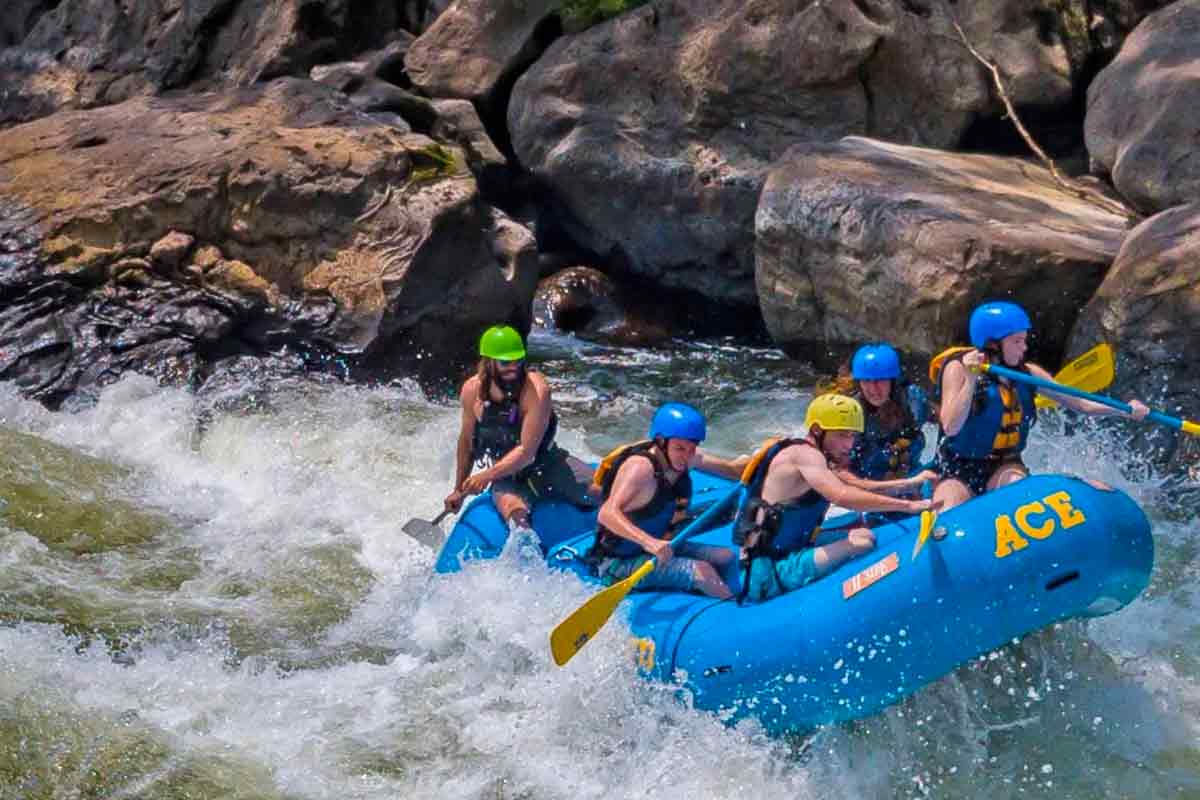 In the heart of the Appalachian Mountains, tucked away in south central West Virginia, is where you’ll find the country’s newest National Park. Though its status as a park has been recently designated, paddling its world class whitewater is a craft we’ve been fine-tuning for decades. New River Gorge National Park & Preserve encompasses over 70,000 acres of land surrounding 53 miles of wild river flowing through a 1,000 foot deep gorge. Whitewater is what initially put the New River Gorge in the national spotlight, with the lower section of the New being one of the classic whitewater runs in the entire country.

It was 1968 when the first rafting outfitter, Wildwater Unlimited, began guiding commercial trips through the New River Gorge. John Dragan was the visionary, and along with his two brothers Tom and Chris and his future wife Melanie, they led 80 people down the river in that first year of business. In 1977, the New River Gorge Bridge was completed, and in 1978 the National Park Service designated the New a “National River.” Along with abounding cultural and natural history, the New River is unique in the fact that, although it is an “eastern” river, which are typically known in the whitewater world for being steep and narrow, the New can flow at extremely high volumes, taking on characteristics more commonly associated with big western rivers. The amount of flow, measured in cubic feet per second (cfs), plays a big role in the difficulty level of rapids, and even whether or not a river can be paddled safely. Flows can be too high or too low, but having such a wide range of commercially runnable flows gives the New River characteristics few other rivers in the world can boast . Commercial rafting outfitters will typically run trips anywhere from just below 1,000 cfs up to 32,000 cfs! In some spots on the Lower New, this difference in cfs can mean a difference in actual water level upwards of 20 feet! With an elevation drop of over 750 feet on its course through the park and such a dynamic scope of water levels, you can paddle the Lower New five different times throughout the year and it feels like you were on five different rivers. 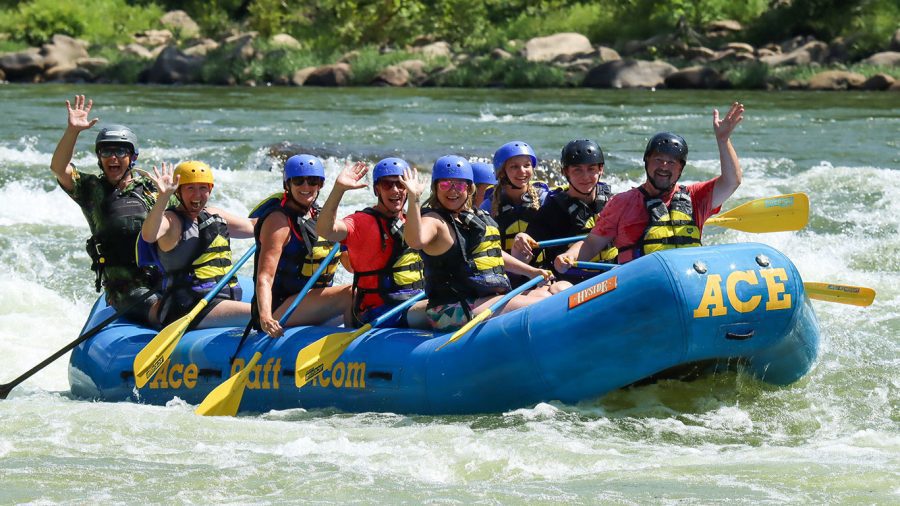 Spring time is known for its big, western-style whitewater. Climbing up and over standing waves measuring 16 feet from crest to trough and avoiding huge hydraulics that would swallow a house is the name of the game during big water. As the water comes down, guides often refer to these middle levels as “crunchy” or “stiff.” In these flows, many of the waves are breaking hard at their crest, making for a day full of incredible crashing hits and romp-stompin’ rapids. Later into the summer, the river’s flow gets lower, and instead of the highway of waves we see at high water, now it’s time to maneuver around the house-sized boulders strewn throughout the riverbed. The technical Class V rapid “Double Z” becomes its namesake at these lower water levels, with paddlers having to make zig-zag moves across the river to avoid the many rocks and ledges. Low water also enables another WV whitewater favorite, surfing! Catch waves and hydraulics with your raft and surf them as long as you can stand it.

All of this whitewater fun is to be had while drifting through the depths of the New River Gorge. Sandy beaches are scattered along the way providing perfect spots to stop for lunch and swim in the calm eddy water. A favorite stop on commercial trips is at “jump rock”, where you get to hurl yourself off of one of those house-sized boulders into the river below. Towering above, you’ll get amazing views of the gorge and its famous cliff and rock formations like the Endless Wall and Ram’s Head. The river trip is capped off with a one of a kind perspective of the New River Gorge Bridge, spanning over 3,000 feet from one side of the gorge to the other, 876 feet above your raft. Action packed and adrenaline inducing, the Lower New River is a whitewater paradise no matter what the season or water level. With 22 different named rapids in eight miles ranging from Class II-V, it is not too much for the first timer while also delivering the excitement, challenge, and variety to keep you coming back again and again. 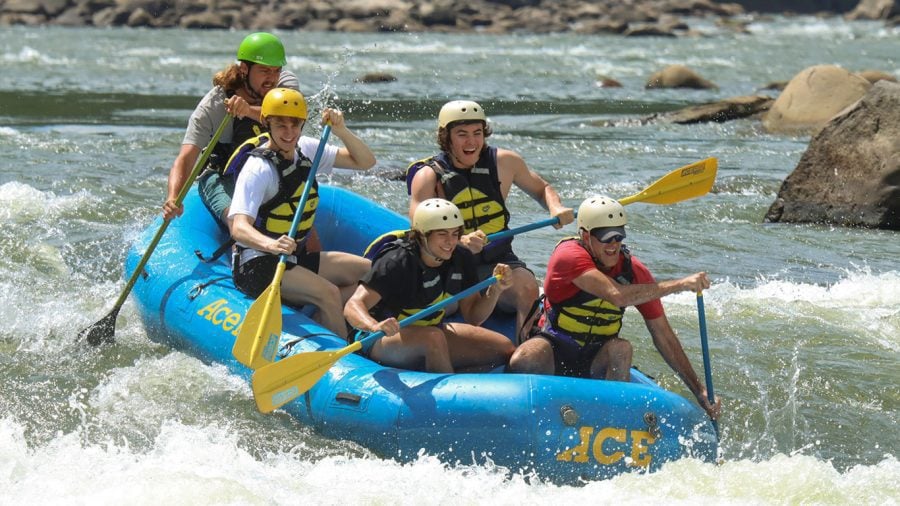 If you’re interested in getting out into the New River Gorge but maybe with a little less adrenaline rush, look no farther than the remaining 45 miles of the New River within the park boundaries. Referred to collectively as the Upper New, this part of the New River is mellow and meandering, sprinkled with Class II and III rapids, and has sections that are absolutely ideal for young children, age 6 and up. Whether in a raft or your own inflatable kayak, the rapids of the Upper New are the perfect introduction to whitewater. Inflatable kayaks are a blast for parents and kids to do in tandem, paddling together around rocks and through waves that routinely crest and crash over your craft. Rapids like The Ledges, Silos, and Rudy’s Ripple will not disappoint! The large, flat pools in between the rapids are great places to jump off your boat and enjoy a swim, allowing for time to simply float along at the river’s pace.

Other side adventures await as well, with one of my favorites being a hike up from the mouth of Dowdy Creek. Flowing into the New River on the right, the explorations begin by making your way through a centuries-old tunnel that allows the creek to flow underneath the train tracks above. Once to the other side of the tunnel, navigate through the creek bed, over rocks and ankle deep pools. Within a hundred yards, you begin to notice the sound of the growing roar with every step and soon find yourself at the base of Dowdy Creek Falls. On a hot summer day, there’s nothing more refreshing than standing right underneath its cool cascading waters. 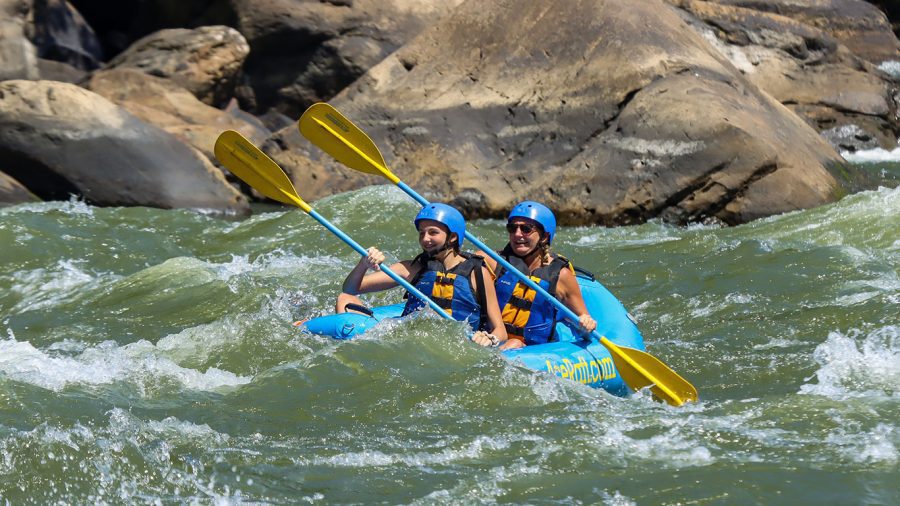 Sandy beaches can be found as you make your way down the river, providing great spots to stop for lunch. At some, your guide may also be able to show you some of the cultural history of the New River Gorge. Ghost towns, old buildings, and even a few cemeteries still remain from the mining era of the 1800s. It’s amazing to think that in the depths of this gorge, in what is now a wilderness, communities once thrived. The Upper New provides quite the setting for family fun and adventure. With multiple access points for varying put-ins and take-outs depending on the water level, there is something for everyone. It’s hard to find a better place to introduce kids to rafting and to wilderness.

With the right amount of technical skills, local knowledge, and the right equipment, whitewater activities in the New River Gorge can be enjoyed independently by visitors. “Private boating” is extremely popular on the New River, both on the upper and lower sections. Shuttles are fairly easy to set up compared to many rafting destinations, and once again, with the wide range of runnable flows, it makes for the perfect destination to hone a plethora of paddling skills. The vast majority of visitors to the park experience the river and all its goodness with a guide and through an outfitter. For anyone without a good amount of whitewater experience and technical skill, this is obviously the best choice in regards to safety and ease of logistics. 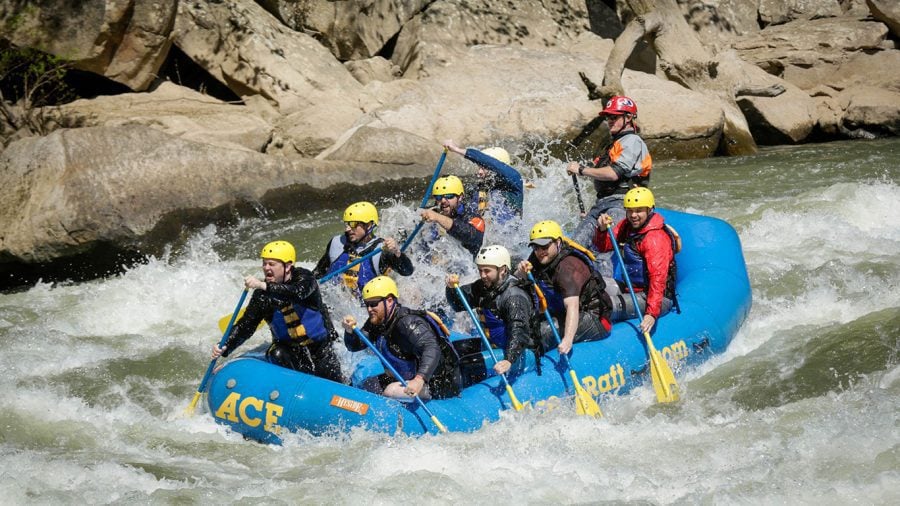 Whether Spring, Summer, or Fall, and no matter which section of river you are floating down, a whitewater rafting experience through New River Gorge National Park & Preserve has something for everyone. There is no better way to